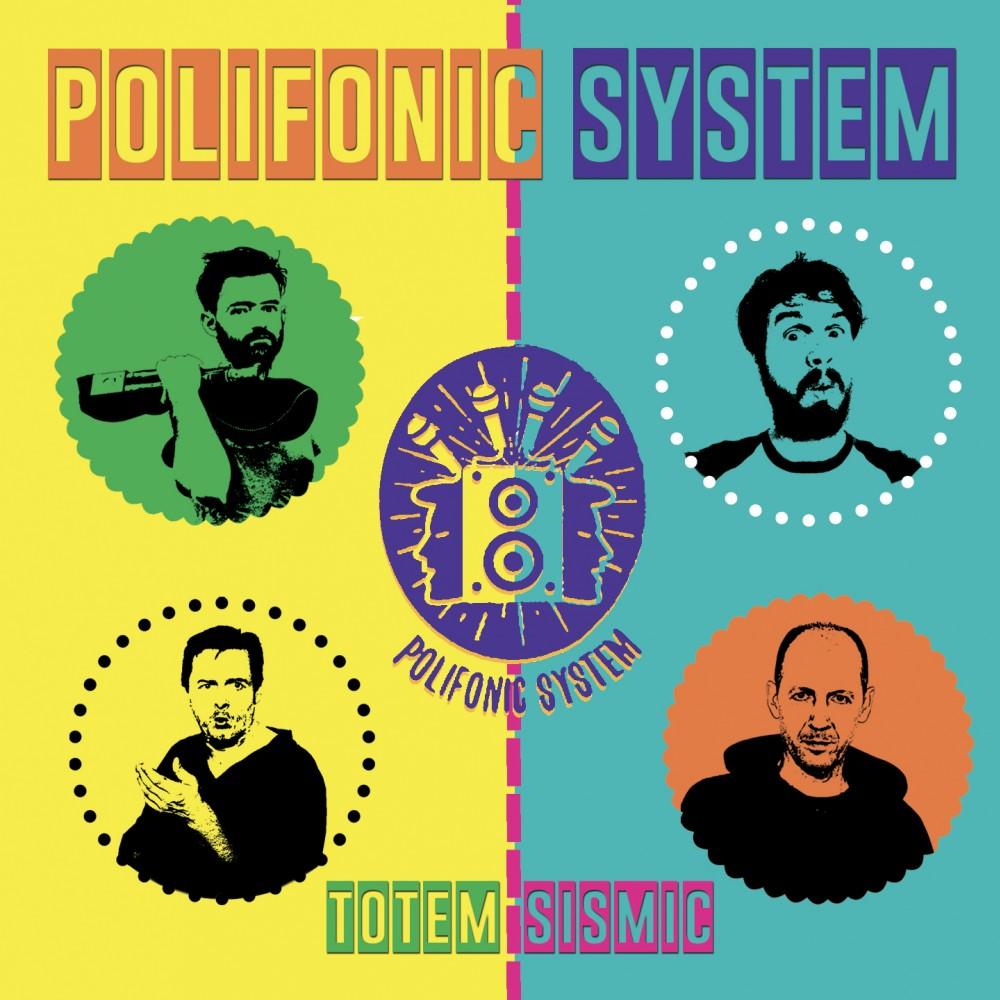 By polifonic system
Polifonic System was first founded by Manu Théron and Ange B, back in 2012, together with an occitan singer who left after a few mounths. The project went on with Henri Maquet and Clément Gauthier in 2013. The question was to get to play together people who have totally different approaches and belong to various generations of occitan music : Ange B plays electronic devices and presents himself as a human beat box since 1986 an, Manu Theron re-invents polyphonic singing since 1994, Henri Maquet plays and sings from late 90ies and Clement Gauthier sings and plays instruments since the late 2000ies. Also the 4 of them come from 4 different regions of Occitany, Clement from the Cevennes Mountains, Manu from Marseilles, Henri from Camargue region and Ange B. from Toulouse. The idea was to gather these variety focusing on occitan traditional and modern dance music, and giving a real "all occitan" point of view about dancing and singing together. The goal was also to renew the ways of performing and composing dance singing for three voices and beat-box player.

CLÉMENT GAUTHIER :
Threw « Rivages » association in the Cevennes mountains, Clément Gauthier rediscovered in the early 2000’s folk and traditional musics and dances. This education led him to study other artistic expressions with instrument makers, professional dancers and various instrument players.
His instrument pratice focuses noy only on central France bagpipes and drone musics and instruments (such as chabrette and boudegue), but also approaches the study of oblique flutes like Kaval, Kawalleh, Ney. He also got fascinated by learning medeiterranean singing, observing and training all specificities both of Occitan language territories (southern France), or Egypt, as he also is an archeologist of ancient Egypt. He founded in 2012 Jericho, a band dedicated to the repertoire of old occitan songs in a vast project of designing these musical themes into contemporary ways of composition.

HENRI MAQUET :
Musician and instrument maker, his enthusiasm for electronic devices, games and instruments, Henri Maquet is an inventor of musical forms and constructions. He plays and builts several types of instruments (from flutes to archaic clarinets, violin, guitaron) and is also a singer. He creates musical instruments out of « sagnes » and « canes », the specific reed woods from his regionProvence : galoubet, pipes of all kinds, minions and blowpipes, he laureates in ethnomusicology in AIx-en-Provence. He also works since 1998 with Gaël Hemery (« chants et musiques de Provence »), Joan Maria Carlotti (Mont-Jòia, Noëls de Provence), and several music ensemble such as « duo maquet-Bachevalier », and develops personal projects that incorporate both his passions for elecronics and instrument making in projects like « Balpoptronic », Butor Stelaris », « Delta Sònic » or « Acousmatic Oc »

MANU THÉRON :
Born in 1969, raised between Algeria and Marseilles, he studied piano since age 7 and learnt singing either with choirs or together with his grand mother. Discovered Occitan language and poetry aged 18, then got involved in the occitan revival movement. In southern italy as well as in Bulgaria, Manu Theron travelled more than 4 years, discovering traditional singing and polyphony and, most of all, getting along with singers and choirs, learning from them listenning diciplin and musical behaviour in a singing collective. How to keep up cultural and social practices linked to language issues through singing, how to develop connections with dialectal oral litterature, how to ignore official folklore institutions, that transform lively practices into museum curiosities ? Here are a few obsessions that came out as a result of all these encounters and thoughts.Back in Marseilles in 1995, Manu Théron then decided to dedicate his life to occitan singing and music. In 1995 Manu starts a vocal trio called « Gacha Empega », very quicly known all around the France  for its incredibly punky vocal performances, and founds 4 years later his polyphonic ensemble « Lo Còr de la Plana », that started performing throughout Europe and a few other continents, won several prices, and discoverd the relevance of sharing this new conception of polyphonic singing with as many people as they could. Passionate and active, Manu Théron’s performances and teachings are inspired by popular mediterranean singing, and often require frame percussions together with a strongly expressive vocal presence.

Totem Sismic is a tongue twister based on the name of the band (Fonic system / Totem sismic) but also gives the audience an indication about underneath influences that get various styles regions and generations to get closer to each other, like tectonic plates. The Totem is also what remains enigmatic and powerful, when all the meanings of an item have been exhausted, over studied or explained.

the meaning of each title :

Vautres que siatz a maridar : you who are to be married
A song that incitates gay people to stay careful when they get married, careful because gay people still get problems in society, but most of all careful because mariage should not bann you from an intense various and joyful sexual life.

A-de-Matin : early this morning
The story of a struggling young woman whose mother sends to La plaine area to fight against police and municipality, when these authorities plan to destroy the city and sale it away to
real estate companies. This fight is tough but not hopeless.

Rigodon dei Bocas : rigaudon of the mouths
the Rigaudon is a dance from southern alps and northern Cevennes mountains, and the texts presents the singers
in a satyric way, Henri Maquet get blown in his reed flute, Clement Gauthier awakes the deads with his singing but gets them dead once when playing the bagpipes, meanwhile Manu
gets every one voiceless when teaching singing ...

Ma' mi faguètz pas : Mum, don't make me ...
An old sicilian waltz with occitan words that show a young girl who begs her mother to let her go to the village balroom, to get along with easy boys.

Polkamploa
it's a word game between "Pôle Emploi" (the Unemployed People care system in France) and the "polka" dance, and also the "amploa" occitan name for anchovies. The song says that all the people who get humiliated in a situation on unemployment, can get a kind of revenge by cutting off the heads of their humiliators, especially when those bastards oppress them with  guilt feelings.

La Pastora : the shepherdess
A young shepherdess gets courted by a knight , but decides not to give every thin at once, and to teach the young man the differences between an opportunity and a clear female consent.

Quand ieu Me'n Vau : When I get going
This is a round circle song (inspired by round dancing songs from southwestern France) that explains how the band members all met and what they do when they go to Toulouse. I cannot say more.

Ieu Soi Anat : There I went
A 7 jumps dancing song inspired by the 7 jumps dances from southwestern France, saying bad things about the band members.

Matin s'ei lhevat : he woke up in the morning
The story of an English king who encounters 13 young ladies,
kiss them all except from one. The unkissed maid gets angry and starts fighting one of her sisters in a gigantic war.

Lo Cat
A young lady gets slapped by her father when he finds her combing her cat. She starts crying and goes to her mother, who begs her to be patient, as money will come when the old husband dies. But her daughter prefers to give food to the flees (to go to sleep) with a young violent man.